Check back here regularly to find out what's going on at Trevor Gauntlett Consulting.

Can Sustainable also be Affordable?

This was the subject of a round-table discussion at the International Chemical Manufacturers' Conference, ICMC 2021, organised by Chemical Markets Forecast.

Trevor was asked to give a perspective on the European chemicals market in the discussion "Does Cost Effectiveness and Sustainability go hand in hand? His case study came from the Lubricants business, where Biosynthetic Technologies claims that their Estolides are carbon negative products with very high sustainability scores.

For those not familiar with recent developments, the Indian chemicals market is now a long way from the low-cost "down and dirty" stereotype of the early noughties, with many plants now approved by downstream users in Europe or by customers who are applying European environmental, health, hygiene and worker safety standards.

Click on the link below to see the presentation Trevor used.

How do you decarbonise industry?

There's a lot of noise in the north-west of England about Hynet a multi-partner project to decarbonise much of the local oil and chemicals industries by the use of hydrogen. So much so that it could be thought by some that hydrogen was the only way to decarbonise.

Whether it was to re-balance the discussion or to enthuse those whose businesses are outside the Hynet project, Trevor was invited by Chemicals Northwest, part of the UK's Chemicals Industry Association, to write a short piece about where CNW's members could tap into other decarbonisation projects and/or sources of funding. Some of the ideas highlighted in the article are:

The articles were seeded by a series of clean growth innovation workshops organised  and delivered by Clean Growth UK, and made available to members of Wirral Chamber of Commerce.

Click on the image for a link to the edition of Elements Magazine as a downloadable pdf.

F&L Podcast - from reporter to commentator

Trevor was incredibly honoured to be interviewed for the fourth F&L Webcast, discussing Brexit, REACH, and Covid-19. All are having an effect on Lubricants Supply Chains; individually, in pairs and in concert.

For example, the United Kingdom is no longer part of the European Chemicals Agency (ECHA), so UK-based companies are having to re-Register from a "third party country" those chemicals that were already Registered under REACH when the UK was a member. As a partial compensation, the UK government has waived the majority of Registration fees for UK REACH, but the UK did not gain access to the data held by ECHA for REACH, so UK-based companies are sometimes having the pay for a second set of testing to support their UK REACH Registrations.

Two other concerns expressed by manufacturers, distributors and consumers of chemicals in the UK are that the UK's equivalent of REACH will diverge - leading to different labelling requirements for substances and mixtures crossing borders - and that the costs associated with Registering for the UK market will be deemed too high and new materials will be unavailable to UK users.

(Update, December 2021) The F&L podcast series has now extended to 16 interviews by Vicky Denton with movers and shakers from across the Lubricants world. 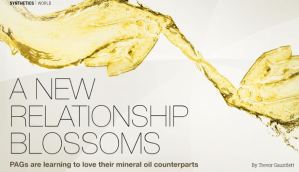 Polyalkylene glycols (PAGs) have great characteristics for Lubricants: lubricity, high viscosity index and hydrolytic stability, for example. However, their incompatibility with mineral oil-based lubricants is a major drawback. Some end-users will use sub-optimal oils ahead of PAG-based lubricants simply because the risk of "soft cheese" is eliminated if the PAG-based oil never gets through the gate.

Is this the moment when the breakthrough is made? Trevor's article for Lubes'n'Greases magazine examines BASF's EEBs, Dow Chemical's new Oil-Miscible PAGs and the short-lived competing offer from PCC Group. Publication followed the rationalisation of the publisher's titles and the demise of Lubes'n'Greases EMEA.

When the regulatory walls close in

Formulators of metalworking fluids face one of the biggest problems of anyone in Lubricants formulating. Mainly this is due to legislation: for example the Biocidal Products Regulation in Europe or restrictions on the use of formaldehyde-releasing microbicides that arose from the US EPA's assessment of Grotan HHT in 2008. However, the global single-sourcing of one of the replacements, BIT (1,2-benzisothiazalin-3-one), added an additional problem when the plant was first shut by local authorities and then partially destroyed by a fire.

In 2017-18 Trevor wrote a two-part article on supply chain security, which foretold much of this, while this month's article for Lubes'n'Greases is an analysis of the options open to formulators.

Trevor became Secretary of the Chemical and Industrial Consultants Association (CICA) in January and drove through the re-design of its website in June. During May the organisation had hoped for a social at CHEMUK 2020, the UK Chemical industries supply chain expo, which was another cancelled conference. However, the videos associated with the conference (lots of bubbles and reciprocating equipment) make a nice link to another article that was published in May.

Can you Formulate to control Air Release?

It's been received wisdom for many years that you can formulate to reduce foaming, but air release is a property that can only be made worse. And worst of all, anti-foam additives (prevent foaming) or defoamers (collapse foam) often enhance air entrainment!

This article by Trevor for Lubes'n'Greases EMEA looks at some of the (limited) solutions to both air release and foaming and a couple of fundamental studies here and here on the formation and stabilisation of air bubbles in oils.

April should have brought three interesting conferences, with the joint IET/IOP spring conference New Challenges in Tribology 2020: Sustainable Transport and Power in Birmingham, UK leading off. A week in Germany was to follow to attend both the UNITI Mineral Oil Technology Forum and ELGI AGM. 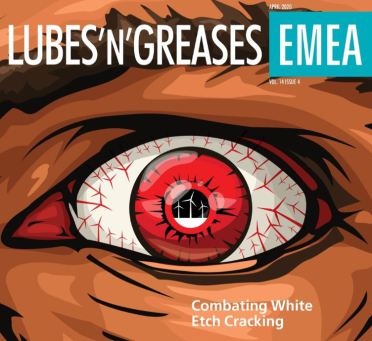 With lockdown being imposed in many countries during March, this could be one of the few "conference reports" that gets published in the near future.

Trevor based an interview with Afton Chemical's Distinguished Advisor Helen Ryan on a brief review of the joint meeting last September of the Institute of Physics and Institution of Engineering Technology (IoP/IET) in London, Tribological Challenges in the Wind Energy Sector.

The article raises an interesting insight into the differences between the academic and industrial perspectives. The "vibe" at that meeting was that the causes of so-called white etch cracking (pitting of bearing elements due to rolling contact fatigue) are now fully understood.

However, as Ryan points out, this is still a live issue for those in industry. Not only are there tens of thousands of wind turbines out in the field that have to be nursed through their next ten or more years of life, but OEMs and bearing manufacturers will seek reassurance that any new fluids don't cause white etch cracking, which - to raise the technical performance barrier - is a phrase that has been applied to failures by more than one mode.

Trevor started blogging on this subject as soon as he entered independent consultancy and then began to write articles for magazines. As the magazine publishers were hazy about what they regarded as "their" copy, the blogs have been updated only rarely.

But hey! The magazines are paying and the out of date blogs just go to show how early Trevor was onto this subject. :)

So, fast forward to March 2020 and here's an update in Lubes'n'Greases EMEA on some of the stuff that was in the blog since 2016, such as Novvi's API Group III-type base oils**, the relatively new Estolides (which got their own chapter in the third edition of Rudnick's Synthetics, Mineral Oils, and Bio-Based Lubricants, published in February 2020) from Biosynthetic Technologies and some applications as Environmentally Acceptable Lubricants of those materials by RSC Bio Solutions.

** note that in February 2021 Novvi no longer uses the Novaspec name, makes "PAO" claims or states that their API Group III-type base oils are made from sugar cane. 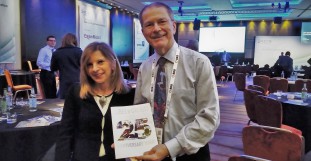 Against the background of reduced travel from India and the Far East, the 24th ICIS World Base Oils and Lubricants Conference was a lower key event than usual. However, Trevor was keenly working the floor, as Lubes'n'Greases Magazine was promoting its 25th Anniversary edition featuring an article he had written. Fittingly for a magazine founded by three women, Trevor's article (no electronic copies, unfortunately) was about Women in Lubricants.

One of the "stars" of the article is Valentina Serra-Holm, President of UEIL, pictured here with Trevor and a copy of the magazine.

Can you make Esters both hydrolytically stable and biodegradable?

This is a play on the classic "you can have it two out of fast, cheap and high quality, but not all three."

The specific answer for esters is that you can make esters that are both hydrolytically stable and biodegradable, but the starting materials would be non-standard, so very expensive. Not quite, according to a presentation by Patech Fine Chemicals' Ronald Hoogendoorn at ACI's 11th Annual European Base Oils and Lubricants Summit at the end of 2019 and critiqued in another article by Trevor for Lubes'n'Greases EMEA, with artwork playing on the description of hydrolytic instability being the Achilles heel of esters in lubricants.

Transport lubricants in Alpine environments have to withstand a lot and Trevor had the opportunity to illustrate the issues with his own photographs in an article for Lubes'n'Greases EMEA. The article was timed to coincide with the northern hemisphere skiing season. 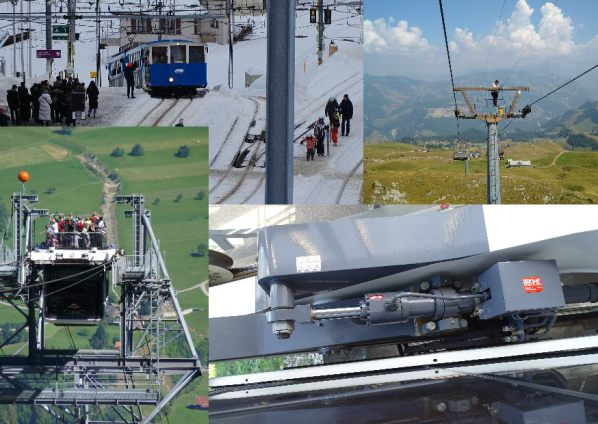 At top left, a winter scene at Rigi Staffel, Switzerland. Three sets of rack railway tracks with the central brown line showing the location of the rack. The stronger brown colour around the rack is a mixture of lubricant and corrosion. Melted snow can be seen around the railway switches. Heaters are required to both melt the snow and ensure the water doesn’t re-freeze in the switches or at the point-ends. Greases have to withstand the heating action, water-washout and any condensation.

Top right, routine maintenance of a chair lift in high summer. Not so easy in the skiing season!

Lower left, the CabriO double decker cable car at the Stanserhorn, Switzerland. The cars ride on the cables, rather than being suspended from them. This reduces swaying and protects bearings.

Bottom right, looking down on one of the CabriO main bearings with associated stabilising hydraulics and (at left in the photo) one of the running wheels on a support cable.