As the site develops, this page will lead you to a series of thought pieces.  These will either be thoughts on the state of our industry, observations on how certain companies do business or discussions on technical developments.

There are also links to articles written by our team.

New Chemistry: is there an opportunity in Lubricants? (updated 28/12/2017)
Trevor Gauntlett 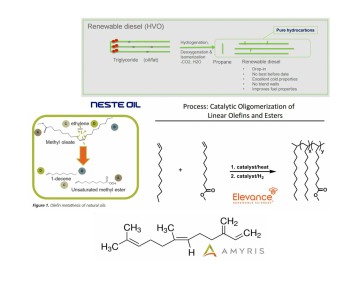 I was asked this question during a recent client visit and broke the long version of "yes" into three parts.

Two of the bullets are illustrated on the composite slide above.  The constituent parts of the slide are in the different Blogs.

Neste's NExBTL route to renewable diesel is a new route (from a new raw material for this product) to an existing product. The overall process of removing oxygen from natural fats and oils gives CO2, water, propane (from the glycerol) and both linear and branched paraffins between about C10 and C22.

Similar processes appear to be behind Honeywell UOP/Eni's Ecofining process: here is a link to some background and the following link for the application.  Eni has implemented Ecofining at its Venice refinery.  Here's a release about the widespread availability of renewable diesel.

Another company that has similar patents is Accelergy Corporation. Their Chief Technology Officer, Rocco Fiato is named on several patents that result in C12 and C14 hydrocarbons for drilling fluids.

Neste also owns patents and has marketed product since 2012 covering renewable naphtha, but has not found a route to market for the larger molecules that might garner interest from the Lubricants industry.

Elevance applies Nobel prize-winning chemistry to break down an oleic ester into a linear alpha-olefin (new route to an existing molecule) and an unsaturated methyl ester (exciting new molecule).

Re-combination in the appropriate proportions gives a commercially accessible route to functionalised PAO.

Click on the image above to see more detail.

Farnesene (one isomer shown on the left), has received a lot of attention in the fuels press, as it is a C15 hydrocarbon, so the right size for automotive fuels.  Clip two or more together and you have molecules of the correct size for lubricant base fluids.

Even more exciting is that there are two completely different chemical routes to this molecule. Amyris’ “Biofene”  starts with sugar cane or wood cellulose, while Intrexon starts with methane and makes claims of superiority for its chemistry relative to gas to liquids and sugar conversion technologies.

Clearly many see a future in the next stage development of these molecules into renewable base oils.  Both American Refining Group and Chevron have taken equity investments during 2016 in Novvi, which was originally a joint venture between Amyris and the Brazillian conglomerate Cosan. On October 24th 2017 the German-owned company H&R (USA) became the latest corporate investor in Novvi. Novvi's stated aim is to produce renewable PAO and Group III+.  The fact that Cosan can produce megatonnes of sugar cane means that any simple chemistry is going to produce large volumes of material at low cost because it starts with waste.

The chemistry of clipping together two or three farnesene molecules and then hydrogenating them doesn't have to be tightly controlled in order to produce an ensemble of mainly paraffinic molecules that meet the criteria for Group III base oils.  Economic wins all round!

How they get to PAOs requires more thought, as the monomer has three branches to start with and the linear alpha olefin (also called normal alpha olefin) feedstocks for PAO production have very low branching ratios.  This reminds me of an oft-used phrase from the early part of this century that all PAOs are not the same and the (ensemble of) molecular structures are critical to performance.  See the blog on Elevance Aria WTP40 for some similar thoughts.

Longer term, I am sure that the clever biology to produce the trans-beta farnesene will be exploited by Amyris and other partners to produce smaller volumes of more added value products. With four points of unsaturation and the possibility to define stereochemistry during reactions at the double bonds, this molecule looks likely to be derivatised and find its way into high value applications like fragrances and personal care; perhaps even pharmaceuticals. Total's investment in Amyris (not Novvi) could be targeted in this direction.

If you have any queries or wish to make an appointment, please contact us: