The simple approach is that methyl oleate is first metathesised with ethylene to produce 1-decene and methyl 9-decenoate. (Slide with the green border to the left)

Step 2 involves the recombination of the products, probably in different proportions, to produce a PAO with some methyl esters attached.  Yet Elevance’s website states that their “highly efficient, selective metathesis catalyst is used to break down complex natural oils and recombine fragments”

Catalysing the metathesis of “complex natural oils” would probably slow down the process due to the steric bulk of the triglyceride.  Attempting to metathesise the C=C bonds of a triglyceride would enhance the likelihood of the different fatty acids metathesising with each other to produce long chain (around C18) diacids and internal olefins.  Elevance only claims to sell decene as an internal olefin, but does sell 1,18-Octadecanedioic acid under the brand name Elevance Inherent ® C18 Diacid.

So, methyl ester it probably is.  But methyl oleate?  Anyone who has specified or purchased fatty acids or their esters knows that these are always mixtures.  With C16, C18:0 (Stearic Acid) and C18:2 (mostly Linoleic Acid) usually specified with maximum values.  Depending on the source C14 might also be specified.

Therefore, it’s safe to assume that Elevance applies some separation technology to FAME (Fatty Acid Methyl Ester) before it starts doing the fun stuff, but it’s still probably performing the metathesis on a predominantly methyl oleate mixture.  By the time the shorter methyl esters and olefins have been produced in the metathesis reaction, separation of these relatively volatile molecules will be comparatively simple. 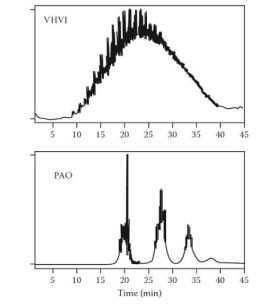 As Elevance uses the phrase “copolymerization of alpha-olefins and mid-size Elevance bio-refinery-derived esters”, we can look to conventional PAO production for hints about the molecular mix that is produced.

There is sufficient precedent from linear alphaolefin production to know that the economics of separation do not extend to pure C8, C10, C12 streams, but rather mixed monomers.  This leads to a distribution of molecular weights in the PAO oligomers.  A typical gas chromatograph of PAO 6 is reproduced from Rudnick’s Synthetics, Mineral Oils, and Bio-Based Lubricants: Chemistry and Technology Second Edition, ISBN 978-1-4398-5537-9, where the spikes on the (lower) PAO GC trace are due to the different combinations of monomers e.g. C24, C26, C28, C30, C32, C34, C36 at around 20 minutes retention time for a trimer of a mixed C8/10/12 feed.  It’s highly likely that similar statistical mixtures are also the case for Elevance Aria ® WTP 40.

Location, location: where does the ester go and how many esters per oligomer?

Elevance Aria ® WTP 40 is a 40 cSt fluid, so will have a significant amount of C60.  Even just considering pure feeds of decene and methyl 9-decenoate, it will also have C50, C70 and minor amounts of C40 and C80.  We don’t know the average ester content, but there will be a distribution from 0 to 6 on C60 molecules unless Elevance has a process that clips together molecules precisely, like Ineos’ patented process for making a C30 molecule identical to the idealised PAO 4, as outlined in US Patent 8455416.

So is this important?

Possibly not in the long term, but taking the PAO example, there were issues that emerged with sample inconsistency during the commercialisation processes.  Laboratory samples, samples from the pilot plant and initial production samples weren't consistent in their properties, due to subtle changes in structures.

Even with commercial product available, it could be worth requesting samples from several batches and doing some simple low-cost testing to demonstrate equivalence.

If you have any queries or wish to make an appointment, please contact us: